Tools that are kept in an unheated shop or garage will soon start to rust. The problem is that moisture condenses on steel and cast-iron because they’re cooler than the surrounding air. All it takes is time before you start to see rusting and pitting. This is a particular problem with tools that aren’t used for a while. What generally happens is that the tool blades get blunt and then you stop using them in favor of sharper tools.

The rust isn’t just unsightly it also affects the operation of the tools. Especially with more complex tools like a tablesaw. The good news is that all it takes is some simple chemistry, a little patience and some effort to restore old, rusted tools to like-new condition.

In this video he compares the rust removing results of white distilled vinegar and Evapo-Rust. Evapo-Rust is a leading commercial rust remover. He uses them on an old Stanley hand plane and an axe head. That allows you to see what they do on flat surfaces and in corners. The Evapo-Rust works a little better. However the white distilled vinegar is probably more environmentally friendly. It is worth noting that Evapo-Rust is acid-free. Some people do a bath of vinegar and then follow it up with a bath of Evapo-Rust. It makes the Evapo-Rust last longer and then it works out cheaper.

An alternative method for removing rust is to buff the rust away. What you do is to wet the surface with kerosene (The kerosene acts as a cutting lubricant). You let the kerosene penetrate for about an hour. You then take a 2.5 inch diameter nylon cup brush that’s embedded with 240-grit aluminum oxide abrasive. This you attach to a drill. You run the drill slowly at say around 500 rpm, and move it back and forth across the surface for a few minutes. The brush should remove the rust without damaging the surface. 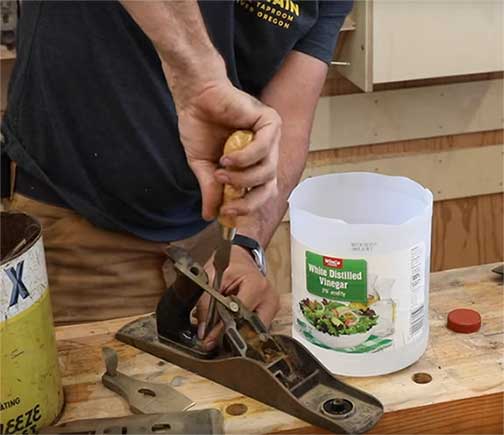